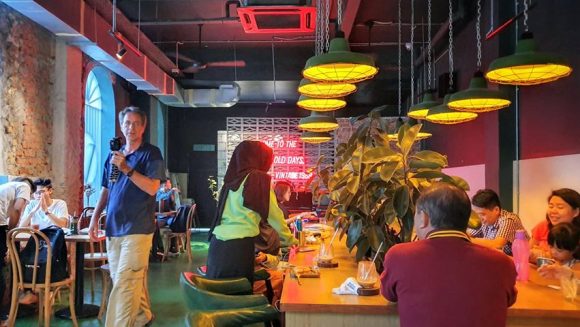 Yesterday was another very interesting day. It began with the realization that I had the power of Reddit at my command. I couldn’t find answers to my questions about the Rode Wireless Go online, but I could simply post my questions on Reddit. And I did, and I got all kinds of interesting answers. With all the information I gathered up, there was only one reasonable solution to the puzzle of why Rode’s “3-stage output pad” went from 0dB to -12dB to -24dB. The solution was that it didn’t. Rode had listed the 3 settings in the incorrect reverse order. The “3-stage output pad” actually goes from -24dB to -12dB to 0dB. The first setting, -24dB, is the weakest signal, the second, -12 dB, is a bit louder, and the final setting, 0dB, is the loudest. And 0dB is the neutral, unchanged output of the microphone.

I’ll copy and paste the main answer on Reddit that helped me understand this:

“All audio systems have some neutral setting for their amplifiers. Some have the neutral and then you can increase the gain (+12 & +24 in this example). The problem is increasing gain (just like ISO) has downsides: lower dynamic range, increased noise, distorted frequency response etc.

Some devices like the Rode Wireless Go already have strong signals coming out of their internal amplifiers, so strong that it is too hot for some camera systems. So they pad (reduce the level of the audio) down. This is typically preferable to having a weak internal pre-amp and cranking it because there are very few downsides to padding a signal.

An analogy could be if you worked for a moving company. It’s better to be stronger than you need to be and not use all your strength than it is to be just strong enough and then over-exert yourself if you needed to lift more than you comfortably could.

Not a perfect analogy but that’s the gist.

Tldr: Instead of starting at 0 and boosting the signal (+), they start with a strong pre-amp and just cut it down (-) if it is too loud for the camera.”

The topic of why the button is called a “3-stage output pad” also got a lot of attention. I got answers like this:

An attenuator is a device that reduces the intensity of an audio (or radio) signal. Some engineer back in the early days of broadcasting started calling it a “pad”. It was easier to say. Pads are designated in decibels (dB) because they are easier than actual signal ratios once you get the hang of them. Since pads always reduce levels, they are specified in negative decibels. This simple notation lets you know that +10 dB means an amplifier (gain) is involved while -10 cB means your are talking about a pad (or a loss).”

Once I read through these answers, I figured out what was going on. The loudest setting on the Rode Wireless Go was actually the unit’s neutral setting at 0db. And the other two settings involved reducing the levels, or “padding” it.

I took the Wireless Go out into Kuala Lumpur yesterday before I met up with Daryl (from the WanderEats YouTube channel). And I was quite impressed with it. I took it down to the river and I set up my GoPro on a railing and then walked away from it to demonstrate how I was no longer tethered by a wire. And the sound quality struck me as excellent. I continued using it throughout my time meeting Daryl and then getting coffee with him, and it performed very well. Though, I did experience a couple of problems.

For one thing, in order to clip the Wireless Go to your shirt collar, you have to be wearing a fairly thick shirt. There was no way to effectively clip it to the collar of my very thin T-shirt. The Wireless Go is light, but it is still heavy enough that, attached to my collar, it flopped all over the place. In fact, it had a tendency to flip over and cover up the mic with the cloth material of the shirt. It just wasn’t possible, so I ended up using the lavalier mic with the Wireless Go clipped to my belt. I will have to buy another lavalier mic – one with a shorter cord. The obvious option is the Rode SmartLav+, but it is quite expensive at 330 ringgit. And to connect it to a camera or a Wireless Go, I also need to buy the SC3 adapter, and that costs 78 ringgit.

Throughout the whole day, I had the Wireless Go set to -24dB. That appears to be the go-to setting if you can get away with it. I remember reading a long time ago that when it comes to microphones, you always should use the weakest signal possible because it is the cleanest. It has the least amount of hiss or noise. And then you use the amplifier in the camera to boost the signal. The camera’s amplifier is stronger and more able to do this.

Meeting up with Daryl went very well, I have to say. I found him pleasant and engaging and interesting. We also had a lot to talk about since we are both aspiring YouTubers, and he also appears to be interested in the tech side of things. In fact, he had just purchased an Osmo Pocket, and he had brought it with him. He was vlogging a little during our get-together, and he even brought out the Osmo Pocket to do a short Q&A style interview with me. I assume that if the audio is usable, he will post it on his YouTube channel.

There was a little bit of that oddness that was part of my meeting with “Lois” the previous day in that Daryl had watched quite a few of my videos, and so even though we were meeting for the first time, he knew a lot about me. In fact, he brought me a cold Vanilla Coke as a present. He knew from my videos that I am crazy about Vanilla Coke. I love it so much.

Our choice of a coffee shop also went very well. We ended up going to the Vintage 1988 Cafe, and it turned out to be a very nice place and very suitable for our chat. I had gotten a lot of rest the night before, so I was feeling full of energy, and I was much sharper mentally than I was for my get-together with Lois and her family and friends. Plus, since Daryl was a YouTuber, I didn’t think he would mind being included in my video. I asked him if he minded, and he said it would be fine. So I just kept the GoPro rolling and chatted with him and he talked about his channel, WanderEats. I didn’t record our actual conversation in the coffee shop. We actually talked for about 3 hours. But I did do a little conclusion with Daryl at the end where I asked him what he thought of the Vintage 1988 Cafe.

I felt very inspired about YouTube in general after my conversation with Daryl. It was nice to talk with another YouTuber and chat about all things YouTube. I haven’t really done that before except for Messenger chats with Terry in Taiwan.

Here is a link to Daryl’s YouTube channel WanderEats