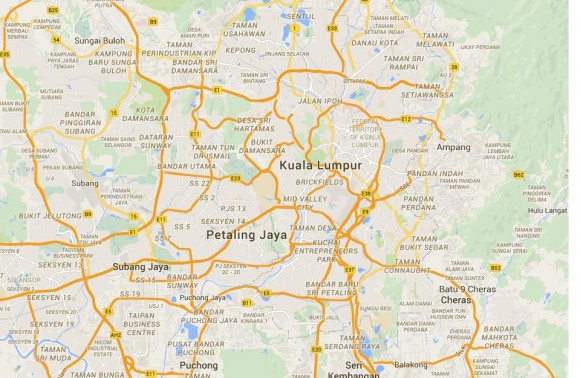 Words fail me about my adventures yesterday. I went out on my bike to find the Olympus service center, and I discovered a first in history – a city without streets, a city made up entirely of highways. Just as I had no choice but to ride from the airport to downtown on a highway and walk from the subway down a highway to get to a bike shop, yesterday I had to navigate a wilderness of highways to go just a short distance across town.

I can’t stress enough how difficult this was. I’ve tried to explain it to people here in the Bird Nest, but no one quite manages to grasp what I’m talking about. Even when I show them my maps of the city and challenge them to find any streets that go anywhere, and they fail, they still don’t understand the situation. It would be like removing all the major streets of Toronto and leaving only the highways. Worse, you then divide the city up into sections and divide them from each other with new highways. The result would be the Q.E.W and the 401 times a hundred and nothing else.

There were times on this epic journey that I screamed as I have never screamed before. My screams while tormented by the children of Ethiopia were nothing compared to my screams of frustration and rage as again and again, I found myself trapped on an 8-lane monstrosity with cars and trucks and buses blowing past at 100 km/hr. There was little I could do to avoid these situations. Once you find yourself in the highway system, there is no way out. There is nothing you can do but keep moving forward, and time again, I’d find myself forced onto an access ramp, and the ramp would land me in the middle of the highway next to the high-speed lanes and having to cross four lanes of high-speed traffic. It was extremely dangerous, and I felt an utter fool for being there. Yet, there was nothing I could do. Perhaps it has something to do with the logic of driving on the left. It seems to me that when you enter a highway in Canada on an access ramp, you enter into the slow lanes on the right. Then you can escape on the next exit ramp without ever having to cross any actual lanes. But here, the access ramps often led directly to the middle in the high speed lanes, unable to move or escape. It was insane, and it became perfectly clear that you simply can’t ride a bike in Kuala Lumpur to go any distance at all. You can ride to the corner store, perhaps, but you can’t go anywhere else. You simply can’t.

This begs the question of how a city like this develops. I don’t think I’ve heard of or seen anything like it. How does a huge metropolis like this develop without any streets? How does it skip the street stage and go directly to highways? Again, comparing it to Toronto, it would be like that city developing without ever having Yonge Street or Queen Street or any of the other streets. Replace all of those with something like the Q.E.W. and that would be Kuala Lumpur. It’s very strange.

I doubt that I would have succeeded in my quest except for the fact that going back was just as difficult as going forward. I’d have given up and turned around, but there was no way to turn around and the only way to go back would have been along the same highway system. And on my map, the Olympus service center was tantalizingly close. As the crow flies, it was a short distance away. Yet, to get there was a journey unlike any I’ve ever taken.

The worst thing about this trip wasn’t really the horrible trip itself. The worst thing is that it is yet another truly awful experience that I’ll never be able to share. I seem to have these horrible experiences that are quite unique and no one will be able to relate to them or understand them. I have to resort to tortuous analogies like removing Yonge Street from Toronto to give some idea of what I’m talking about. When I relayed my story to people at the Bird Nest, they simply responded by one-upping me with stories of the horrible traffic in Mumbai and Istanbul. I tried to get them to understand that I wasn’t talking about heavy traffic. I understand and can handle heavy traffic. I’m sure cycling through Mumbai would be difficult and frustrating. But at least Mumbai has streets. I’m talking about the entire lack of streets, and unless you are a cyclist and tried to ride across Kuala Lumpur, you can never understand what I’m getting at. Other people at the Bird Nest tried to sympathize by talking about trips they’ve taken by car around Kuala Lumpur. But, again, it’s not the same thing. By car, Kuala Lumpur would be challenging and you’d come away with an impression of endless bypasses and flyovers and expressways. But unless you tried to go anywhere on foot or by bike, you’d never fully realize that there were no streets offering alternatives to these highways. It was highways or nothing.

On the positive side, the traffic flowed smoothly and somewhat competently. Plus, (the real blessing) it is not a Malaysian habit to blow the car horn. Perhaps they did in the past, but they’ve gotten past that stage and the traffic was blessedly quiet except for the roar of the engines and the scream of the rubber tire on pavement.

I won’t detail every single moment of this horrific journey. It would take far too long. Suffice it to say that it took me over three hours to travel a distance that in Toronto would take perhaps fifteen minutes. And I did in the end find the Olympus service center. It was located in a massive shopping and office plaza called Mont Kiara Plaza. I experienced a very bad moment when it wasn’t at the address I had, but a friendly guy at an information desk told me that they’d just moved to a building nearby. I almost didn’t get into the building because they required official ID to log in. And I had no ID with me. I had never thought to bring any. But my “Cycling Canadian” name card (cut with scissors from a photocopy) convinced them to let me in. To my further relief, the Olympus service center was nearly empty and I was served right away by a courteous and extremely professional clerk. It was wonderful to be in that modern environment – one running on rules that I understood. I was submitting an expensive camera for servicing, and there were steps and procedures to follow including making a careful note of all the equipment I was giving them, all their serial numbers, and the condition they were in – dents, scratches, marks, etc. Then there was a detailed list of the problems with the camera. When this was done and entered into the computer, a separate printout was made for the camera body, the attached lens, and the grip. I had to review each form carefully and then sign them. Now I just have to wait. The woman said that I would likely get a call or email from them in two or three days with a quote for repairs. And the whole process would take about ten days.

My return to Chinatown was not quite as harrowing as my trip to Mont Kiara. Highways tended to converge and join in such a way as to lead to downtown Kuala Lumpur. Going outward from the center is, logically, much more complicated. That being said, it was a nightmare, just a slightly less traumatizing one.

There were other things I could have done at that point, most of them involving the Internet, but I’m still experiencing so much trouble with my eyes that I couldn’t face it. My eyes were on fire and I felt so tired that I could barely function. Even now, the next morning, my eyes continue to burn and I find it difficult to really do anything. Not to complain too much, but this really sucks. It’s not like having a sore foot or a bruised palm. This problem with my eyes affects my brain directly and I just can’t easily do all the normal things I enjoy and need to do – like write, read, and go on the Internet. I’m exhausted all the time. The amount of sleep I get has no effect on how I feel in general or how my eyes feel – I always feel exhausted and my eyes burn and won’t bring the world into focus. It sucks.

At just after three o’clock in the morning, I stepped out of my tiny room to go take a cool down shower. I do that several times a night to deal with the heat. When I opened my door, however, I ran right into Dan – a friendly British fellow – and he asked me if I wanted a beer. He was going out on a beer and snacks run. I wasn’t really up for a beer, but I said sure, why not, and then I found the night owl gang of the Bird Nest still up and still sitting around in the common area drinking beer, smoking, and trading stories. I sat with them for a while and chatted. It was an interesting experience – a throwback to the backpacker days.

Around four-thirty, the party broke up and I went back to bed to get some more sleep. Just that one beer did me in and this morning, I can feel the effects. My eyes are now swollen in addition to burning and being blurry. I had intended to wake up early and go to the Internet café, but I couldn’t get out of bed. My plan is still to go to the Internet café. I have to do some final research on spokes and decide what to do. And I want to fix the website if I can. I’m not looking forward to it though. The strain on my eyes will be hard to take.