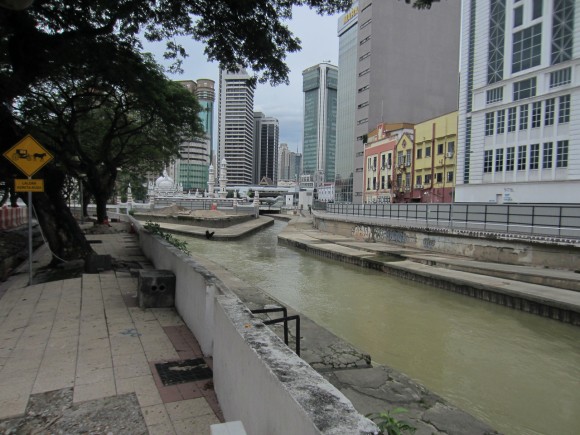 I already covered the events of yesterday – my success in mastering the transit system and finding a potential bike shop. Perhaps I didn’t mention the tone of things. What I mean is the social atmosphere out there. It’s a strange one, and I’m not sure I’ve ever encountered it before. At this point, I still know nothing about Malaysia, but I do know that the population is largely a mix of Malays, Chinese, and Indians, with a small number of aboriginal groups. The Malays are almost entirely Muslim, and the majority of the women here wear the head covering – the hijab. I assume that all the women I see with the hijab are Malays. The Chinese and the Indians are equally easy to pick out just because of their facial and physical characteristics. It’s a new experience for me to see these three cultures completely side by side and in evidence everywhere. Whether you’re walking down the street or in a shop or in the subway, your eyes flick from person to person, from group to group, and your brain classifies them – Indian, Indian, Chinese, Malay, Malay, Chinese, Chinese, Indian, etc. At the moment, I have no idea how they deal with each other. Do they like each other? Do they interact with each other or do they just stick with their own kind? What languages do they speak among themselves and then with the other groups? Do they eat only their own food, or do they mix it up? I see Chinese restaurants that look like Chinese restaurants you’d see in China with the exact some food and the same menus in Chinese characters, the same old Chinese men in the clothing old Chinese men wear hanging out talking. And I’ve seen the Indian restaurants, each with a complete selection of Indian food and staffed by Indian waiters with the typical Indian mustaches. The guy who helped me at the Indian restaurant yesterday said that he was from India. He wasn’t just Indian. He was an immigrant worker born in India and now working and living here. His wife and children are back in India, and he supports them with his job here. It’s easy to see how that would happen as local Indian business owners would look to India to hire employees. As always, I find the Chinese restaurants too intimidating and the servers too unfriendly. I haven’t even tried to eat at one of them. I find the Indian restaurants typically easy to figure out and the staff very friendly and warm. I get a lot of smiles and “No problem”s and the typical Indian headshakes. I imagine I will eat at those places most of the time. They serve simple food in a simple way. The Malay restaurants are a bit of a mixed bag with traditional food mixed with the food introduced by the various European colonizers. The one I ate at my first night had a lot of dishes with words like “noreng” and “nasi” in them – typical of leftovers from Dutch colonizers.

I’ve mentioned the Indian men with their mustaches and very Indian look. The Indian women are also typically very Indian with full saris and adorned with Indian jewelry. I went into a little convenience store on my rounds yesterday, and it turned out to be run by Indians. There were three employees, and each one could have walked off the streets of India. And despite being in the heart of touristic Kuala Lumpur, they were quite interested in me and reacted strongly to my presence – in a friendly and interested way. This happens all day long here. I go into a store, and I find that it is staffed by traditional Chinese. Then I go next door and walk into an Indian place. Then I’ll be surrounded by a gaggle of young Malay women all wearing the head dress. You jump from culture to culture and seemingly from country to country as you move around. Then, when you go into a modern store like my bike shop, Bike Pro, you are in a typical business establishment of this millennium with everyone dressed in Western clothes and speaking English and buying the latest technology.

Malaysia is also clearly a fairly advanced economy. There’s a roughness around the edges of Kuala Lumpur, certainly, but the streets are not filled with tricycles and animals and ancient buses. They’re filled with private cars, most with just one person in them. There are highways everywhere filled with cars zooming around. There are big parking lots around shopping malls, all filled with cars. Traffic lights control the intersections and send cars on their way. From the elevated subway, I saw huge housing estates. I also saw many of these estates while cycling in from the airport. They consisted of hundreds of nearly identical little one-story houses all stuck together in long rows. I assume each was a typical one-family home. They all had the same clay tile roofs, simple walls around them, and tiny driveways with a little car sitting in each one. The houses were clearly modern – fully wired and plumbed and air conditioned. I haven’t seen inside one of these houses, of course, but the standard of living appears to be quite high. Certainly, it is another world entirely when compared with the Philippines.

Now that I’m over the initial shock of my arrival and the impressions of a dumpy and uninteresting city, I’m starting to see the charms of the place. I imagine that if you had money, you could live a fully modern life here with all the luxuries and conveniences. There would be nothing you could get in Europe or North America that you couldn’t get here. You just have to know where to look and where to go. And the modern transit system probably makes a huge difference. Already, my life has improved dramatically because of it. I was able to get to this bike shop easily and quickly. Going there on my bicycle would have been a much more challenging trip – perhaps a horrible one. I’ve only made that one trip on the transit system, but from a glance at the map, it seems that the system covers the entire city. I imagine it is like Taipei. The MRT in Taipei transformed that city and made it enjoyable and liveable.

There is, by the way, an old and famous Hindu temple right beside this guest house. I have not been inside it, but raucous music comes from it at different times of the day and night. I can’t say for sure, but it sounds like live music – crazy horns and other things producing a wild Indian music. I have not switched over into exploring mode and photography mode at all, but it appears that there is a lot to see. I can see that being yet another pleasant problem. One could likely spend months exploring just this city. Just like in Taipei, you could probably spend years here and not see everything.

Not everything is roses, of course. It is much more expensive than the Philippines, and it would be costly to spend any amount of time here. But the biggest problem I face continues to be my eyes and my vision. I slept a long time last night and am well-rested in my body, but my eyes continue to burn and be very sore. It doesn’t make any sense. And my vision continues to get worse. I am reading a book at the moment, and I can’t see anything on the page without my cheap reading glasses from the Philippines. It seems strange to me. My eyes were fine when I left Taiwan and they were fine all the time in the Philippines right through all my travels and the typhoon experience. They were fine when I went to Cebu and during my initial time there. Then, boom, almost overnight, I could hardly see anymore. It’s weird that my vision would deteriorate so quickly. And this vision problem is affecting me greatly. It seems to make me tired as I struggle with it all day long. It’s a strain. I should feel rested and full of energy right now, but I’m totally focused on my sore eyes. It feels like I’ve been awake for 48 hours instead of having just woken up from a good night of sleep an hour ago.