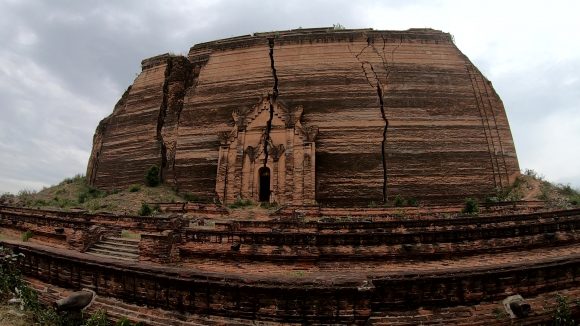 As always, things are going much more slowly than I planned – especially regarding finishing up the YouTube videos from my final days in Myanmar. I thought I would stay in the Grocer’s Inn for three days and then move back to my usual hostel where my bicycle and other gear is in storage. But as one day ended and I was still nowhere near finishing this or that video, I decided to stay here one more day and then one more day and then another. And I’m still here. The plan is to stay here for two more nights, and then I will finally move back to my usual hostel and start making some serious plans about what comes next.

I’m feeling quite committed to this idea of returning to Myanmar. I’ve spent a lot of time over the last few days brushing up on the history of Myanmar plus learning a lot more about the modern country, and this is keeping me inspired for a return. The events in Myanmar during World War II are particularly fascinating. Myanmar (known, of course, as Burma at that time) was a key player in the struggle against Japan. This series of events and battles in World War II involving Myanmar are generally referred to as the Burma Campaign (at least from the British side of things). I think this was all new information for me. It’s possible I’d read about it before in some history book long ago, but I’d completely forgotten about it.

I won’t go into all the details about the Burma Campaign because I don’t know them all, but also because I’m sure I will get a lot of it wrong. However, the basic idea seems to be that the struggle over Myanmar was related to helping the Chinese fight against the Japanese occupation and invasion. The Allies were supplying China with weapons and fuel and food and all the other supplies they needed to fight against the Japanese. And these supplies were flowing through Myanmar and entering China along the famous Burma Road. This road is about 1,150 kilometers long, begins in the town of Lashio in Myanmar, and ends at Kunming, Yunnan Province in China. It was built by hundreds of thousands of Burmese and Chinese workers from 1937 to 1938. Supplies landed at Yangon (then called Rangoon) by ship and by plane and then were transported by rail to Lashio. From there, they continued by truck along the Burma Road, intended for the nationalist armies of Chiang Kai-shek. After reading all this, I’m even more interested in going to Lashio. Perhaps I can even see what remains of the Burma Road.

The Japanese were aware of this, of course, and they invaded Myanmar partially in a successful bid to cut off the supply route along the Burma Road. The Allies countered with one of the most astonishing efforts of World War II. This involved coalition forces from over forty countries, invasion forces dropped behind enemy lines in wooden gliders, marauding jungle fighters that put Hollywood movies to shame, and engineering efforts that astonish me. The basic idea was perhaps threefold: They had to push the Japanese out of parts of northern Myanmar. Once that was done, they could build a new road from Assam in India all the way across Myanmar, through the town of Myitkyina in Kachin State and linking up with the Burma Road somewhere north of Lashio. This new road was called the Ledo Road and is one of the great engineering feats of the war. (It was later renamed the Stilwell Road after American General Joseph Stilwell.) Finally, as they laid down the road, they also laid down three fuel lines covering something like 2,000 miles to bring gasoline, diesel oil, and lubricating oil to the fighting forces in China.

My poor mind was reeling when I read all of this and watched some of the videos on YouTube about it. The famous and romantic names flew thick and fast as I learned about this period of history: The Burma Road, The Ledo Road, Chongquing; Chiang Kai-shek; Merrill’s Marauders; the Chindits; the CBI; Lord Mountbattten; General Stilwell. I think the scale of what went on during World War II is often forgotten – at least by dummies like me. And it’s often overlooked that armies need supplies, and getting those supplies to the armies is what wins wars. In movies, we see the fighting, and it looks like war is all about soldiers shooting at each other. But when you start to dig deeper, you see that these wars were more about building roads, building airstrips, building train tracks, building bridges, and building pipelines. And then you have factories spewing out trucks, jeeps, bulldozers, and planes to carry the guns, ammunition, tanks, and artillery pieces along those roads and railways and to the airstrips. And when armies lose ground and have to retreat, they send out the demolition engineers to blow up and sink and burn down everything they’d painstakingly built so that it doesn’t fall into the hands of the enemy. And when they start winning and advancing again, they have to rebuild everything that they destroyed. (There is an astonishing story of how the British sank 200 ships on the Irrawaddy river to keep them from the advancing Japanese. And those ships are all there underwater to this day.) It’s a mammoth undertaking spread out over months and years while soldiers are dying of malaria and other tropical diseases, sweltering and shivering in tents in the jungle as the monsoon rains pour down.

It was a new idea to me that the Allies were so intent on supplying the Chinese with weapons and supplies to fight the Japanese. Then again, I’m not a history buff. I’m sure this is common knowledge to anyone that reads more about history. And when I first came across this story, I wondered why they did it. China was an ally in the fight against the Japanese. I understand that. But I didn’t fully understand why Myanmar and the Burma Road was so important. But then it started to make sense as I read more. The British were worried about India. If China fell completely to the Japanese, then they would have an open path into India. So it was strategically important to them to keep the Chinese in the fight and stop the Japanese from advancing. China had the population and the will to fight the Japanese, but they didn’t have the weapons at the time.

There is a lot more to this story that I want to learn. I feel like there is something about the Japanese occupation of Myanmar (Burma) that I’m missing. In every other country that I’ve visited in Asia, the story of the Japanese invasion and occupation is right in your face. It’s a part of the country’s history, and it comes up all the time even if you do casual reading. Spend even the smallest amount of time in Taiwan, for example, and you will soon hear a ton of stuff about the Japanese occupation and the fight to eventually drive them out. The same goes for the Philippines and Indonesia. And when you go to those countries, you generally see physical evidence of the Japanese presence. The Japanese invasion of Asia was like a tidal wave that flowed over the whole region, and when it retreated, it left evidence behind. But the story seems different in Myanmar. The story of the Japanese doesn’t generally come up. It’s not part of the zeitgeist. And I wonder why that is.

In addition to Myanmar’s role in World War II, I’ve also been reading about post-war Myanmar. I know the basics – everyone does, I guess. But it has been fascinating to dig a bit deeper and learn more about the military takeover in 1962 and all the pro-democracy struggles since then and the life of Aung San Suu Kyi. And, of course, you can’t spend any time learning about Myanmar without delving into the situation of the Rohingya. I knew a fair bit about what has been going on, especially since I recently visited Bangladesh, and there are currently around 700,000 Rohingya living in Bangladesh in refugee camps. But there is a lot I don’t know, and my reading has taken me down that path as well.

A lot of other interesting facts about Myanmar have come up. Here’s a sampling: Myanmar has a population of 56 million people. Somehow I thought there were more than that. There are 135 ethnic groups. Interestingly, the Rohingya are NOT officially considered one of those groups. The official government line appears to be that they are not citizens of the country at all but illegal immigrants from Bangladesh. That is their justification for everything they’ve done to drive them out.

68% of the population are Burmese; 9% are Shan; 7% are Karen; and 4% are Rakhine. The national language is Burmese. The peacock is the national bird. The political divisions are quite complicated in that the country is divided into 21 administrative divisions, 7 regions, and 7 states. Naypyidaw is the modern capital and the third largest city in the country after Yangon and Mandalay. It was founded in 2005 and has an area of 4,800 square kilometers, giving it a low population density.

The country is between the Indian Plate and the Sunda Plate. The two plates meet at the Sagaing fault line, and this is the source of all the powerful earthquakes. There are three major rivers in the country: the Chindwin; the Irrawaddy; and the Salween.

A person from Myanmar is known as a Mynma. Myanmar has its own traditional fighting style known as lethwei. A fighter from Myanmar – Aung La N Sang – is the current middleweight and light heavyweight champion of the ONE Championship mixed martial arts organization (based in Singapore). He is known as the Burmese Python. The military takeover of the country took place in 1962. The coup was led by General Ne Win. A robust youth movement has sprung up in recent years with the opening up of the country and the beginning of elections. Part of that are rock and pop bands, such as the Me N MA Girls and The Rebel Riot.

Aung San Suu Kyi is probably the most famous person from Myanmar, and gained world-wide recognition for her role in bringing democracy back to the country. She even won the Nobel Peace Prize for her efforts. However, since becoming the de facto head of the government, she has fallen from grace because of her refusal to support the cause of the Rohingya. There have even been calls to strip her of her Nobel Peace Prize.