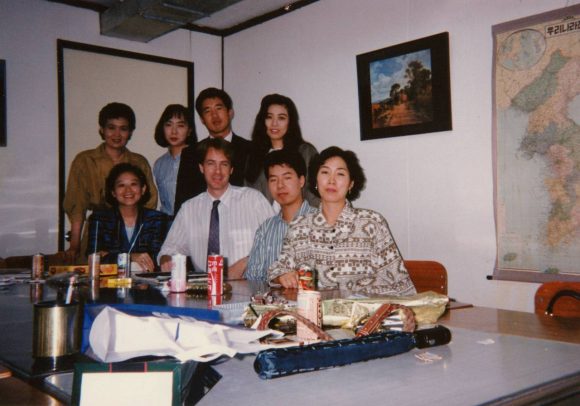 When I saw Seoul from the air, my heart sank. It sprawled snow covered for miles in all directions, a crush of aggressively square buildings without a tree in sight to break up the monotony. From the crowded airport bus, I could see nothing at all except the occasional light in the darkness. The outside of the windows were sheeted in ice from the storm, and the insides dripped with perspiration.

With no visual reference and no chance of freeing my arms from the crowd of people to extricate my map, the journey felt endless. It was impossible to move to the front of the bus, and I gave myself up to fate. I would go where the bus went.

It was only by luck that when eventually I was blown off the bus by the rush of people pushing to get off, I was somewhere near downtown. My feet hit the ice covered pavement, and, pushed from behind, I slid off balance across three lanes of traffic. I finally made the sidewalk already soaked by the freezing rain and chilled by the icy wind.

It took more than an hour to find a place to stay. I could have popped into a number of hotels that I passed, but I was looking for the Inn Dae Won, a traditional Korean inn known as a yogwan, which Bill and Katie had specifically recommended. It was one of a handful of yogwans in Seoul which had been taken over by foreign guests looking for that elusive mixture of the “real” Asia and cheap living. Newly arrived English teachers like myself often ended up there or similar places on their first night in Korea. Some lived there their entire stay. Korean Immigration also knew of the Inn Dae Won. One officer told me during a later interview that it was a “bad place” full of “drug addicts and English teachers”.

I was feeling the shock of my arrival and was very relieved when, with the help of a cook from a small restaurant, I finally found the yogwan squatting in a bewildering maze of tiny alleyways tucked behind the concrete, steel and glass monsters of downtown Seoul. I was strongly looking forward to putting down my pack in a comfortable and secure room, a haven in which I could curl up and lick my wounds. I eagerly opened the door but then looked around in dismay.

My room was about five feet by six feet. The ceiling, a good four inches lower than my own six feet, hung down here and there in bulges of thick yellow linoleum, made hideous by the light of the single uncovered fluorescent tube. The linoleum continued down the four walls in smooth curves around the corners. They had never bothered to nail it down and I lifted up the edge where the linoleum ended on the floor. Dirt, mould, food crumbs, cracked grey cement. In the far wall was a small window. I tried to look out. Hunched over, I pulled back layer after layer of cloth, old plastic, rotting tarp and finally reached smoke blackened glass. Beyond the glass was nothing. More linoleum, some exposed cement, a brick, an inch of crud, darkness. I wasn’t surprised or disappointed. By that time I hadn’t really expected to see anything comforting.

I let the window coverings fall back into place and lay down on the ‘yo’, a thin mattress similar to a futon. I pulled the heavy, smelly ‘ibul’ up to my neck in an attempt to get warm. The ibul, a Korean style quilt, was a patchwork of bright and gaudy colours. The material was an unpleasant synthetic, cold and rough to the touch. The ibul was square and not long enough to cover my feet. There were no sheets. With the ibul right up to my nose I could smell all the people that had ever stayed in the room. There was no other furniture at all in the room.

I tried to write a letter, but the pen kept slipping out of my nearly frozen fingers. I gave up and through the cold billows of my breath watched a line of insects march resolutely from under the linoleum, across the floor, up the wall and disappear into the folds of rotting material framing the window. What insect could possibly survive this cold, I wondered. Perhaps they emerged from some warm place below the room and survived the cold long enough to rush to some other warm place. More likely the heat in my room had only recently been turned off, and they were running for their lives. Looking about my gloomy new home, I couldn’t help but wonder if I should follow their example.

The heating system so painfully absent was called “ondol”. There were supposed to be hot water pipes running directly beneath the floor. Everything in Korea is done on or close to the floor to take advantage of this heat. Quite often there is one place much warmer than the others, called the hot spot. This was the place of honour and traditionally a guest in a home would be seated there. From time to time I placed my hand on the floor, but it remained obstinately cold to my touch.

The door to my room was about five feet high. Years of accumulated linoleum and wood patches made it as thick as the wall. Too thick to be swung shut, it had to be lifted and shoved hard on each corner. It closed with a soft and dusty whomp, adding to the cloistered atmosphere. It wasn’t a room. It was a cave, a cell, a vault. I looked at the door speculating about any warmer or cheerier places out there beyond it, but what I remembered of the rest of the yogwan wasn’t encouraging.

Its rabbit warren of passages and tiny cubby-hole rooms centered on a cluttered courtyard open to the skies and the elements. Rain, snow, wind, smog, dirt and dust had free play. The view of the sky, which could have provided some much needed charm, was shrouded in old ropes, electrical wires, and antennae draped in laundry. Pants, shirts, socks and underwear hung from them in dubious frozen postures.

The rough cement floor of the courtyard sloped towards the centre where a single hole drained away everything but raw sewage from the inn. In one corner sat a couple of old couches, tables and chairs, a nod to the strange ways of foreigners who liked to sit there and talk when it was warm enough. The opposite corner contained a charcoal heater that kept a couple of pots of water always on the boil, one for washing and the other for tea, coffee, or “ramyon” the popular instant noodles. The fumes from the charcoal trapped in the enclosed area gave many people headaches, but at least it sometimes masked the other, more nauseating smell of urine. On the wall above the tables was the inevitable hand written poster asking everyone to please clean up after themselves and be considerate of other lodgers who might want to sleep after 11 pm. To the right of the couches and tables was the small hallway that led to two rooms, one of which was mine. Above the hallway entrance was the Inn Dae Won trademark, a sign reading Inn Dae Won. Each of the letters was formed by drawings of bending and twisting bikini clad women.

The owners of the inn and their entire family lived in a couple of rooms right beside the small entrance hall. Their rooms were a bit larger and kept closer to the original Korean design with walls made of separate units on sliders. During the day these units could be slid back and forth much like glass doors in a cabinet. For privacy at night they were pushed back into place to form solid walls. The owners monitored the guests as they came and went, signed people in and out, and collected money, all the while lying down in their living quarters. The rumble as the heavy units moved in their tracks and the final crash of the glass panes when they landed in place was part of the constant chorus of background noise in Korea.

The entrance to the inn was a small almost hidden doorway filled with long strings of hanging beads. On the right wall of the narrow hallway was a bulletin board covered with pinned up notices: messages from travellers to their friends, maps to the best places to eat, instructions on changing money, directions to the nearest bathhouse, advertisements for English teachers and blond blue eyed “models” – the classifieds of backpackers. Directly opposite on the left wall was a slotted wooden container for mail. It brimmed over with unclaimed and forwarded mail. Each of them was stamped with sad, almost desperate pleas: Please Forward! Please do not throw away! Important! Personal! And there were postcards: I’ll meet you in Bangkok in September, if not there leave a message in Manilla. See you on Boracay! In Nepal! In Karachi!

Some of these dated back years, patiently waiting to be picked up, no one willing to pass final sentence and throw them away. They became, along with signatures in hotel registries and embassy visitor books and notes written in discarded paper backs, part of the paper trail that backpackers in Asia leave behind them. As I travelled around Asia I would often pick up these paper trails and though never meet the people, find out much about them. I would often be one step behind as we followed the same well-worn trail through islands in the Philippines, towns in Vietnam or villages high in the Nepalese Himalayas. Every day, as I signed my name in a hotel registry or in a boat’s passenger list, I’d see their name just above mine, having checked out that morning or the day before.

It felt like it was very late, but when I looked at my watch I found it was still early. Too early to be in bed and far too early to be this depressed. I got up and went out to look for some food or someone to talk to. Just outside my room I met Robert.