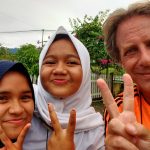 Monday July 30, 2018
4:00 a.m. Room 205B, Khana Hotel
Calang, Aceh Jaya, Sumatra
It hardly seems possible, but I woke up to the sound of a heavy rain falling. I’ve lost count of the days that this rain has lasted. It’s strange to think it, but counting the hours doesn’t even make sense. With a normal rain storm, you’d say it lasted twenty minutes. A really bad … 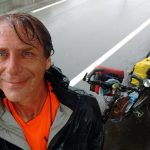 Saturday July 28, 2018
5:00 a.m. Room 103, Losmen Mustika Sari
Meulaboh, Sumatra
I seem to have finally gotten caught up with events, and I am writing this in real time as opposed to summarizing days from the past. It’s early in the morning, and, assuming there is not a massive rain storm brewing and assuming my stomach doesn’t suddenly start causing big problems, I’ll be leaving Meulaboh. … 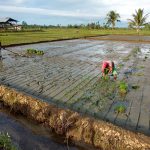 The next major stop on my route was the somewhat major city of Meulaboh. I think Meulaboh is the largest city on the coast before you reach Banda Aceh. The distance from Blang Pidie to Meulaboh was a bit too much for one day of riding at one hundred and twenty kilometers. I could have done it, but there was no real advantage to riding …

07 – The Road to and from Tapak Tuan – Ocean Paradise 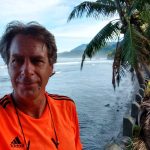 I don’t even know what time I crawled into my tent or what time I finally fell asleep, but it must have been early because I felt quite refreshed when my eyes popped open and I emerged from my tent at around 4 a.m. I had settled into my tent the night before with a clear intention of getting up this early. I knew that …

06 – Camping in a Fish Market on the Beach 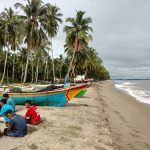 After a long, rain-filled day, I arrived at the ocean. I saw a small path that led to the beach, and I turned my bike down it. I had cycled enough for the day, and I was thinking about where I might be able to set up my tent for the night.
When I got to the beach, I found a group of about twenty men …

05 – A Wet, Wet Day from Subulussalam to the Ocean 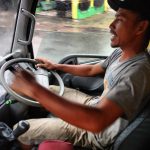 The distance from Subulussalam to the next town that I knew contained some form of accommodation was 152 kilometers. There was no possibility of covering that distance in one day, so I knew I would be spending the night in my tent, and hopefully on the ocean. I carefully calculated the distances down out of the mountains and to the beginning of the ocean. The … 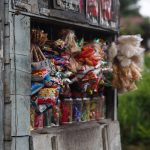 Despite practicing hundreds of times while I rode my bike, I simply could not pronounce the name Subulussalam when someone asked me where I was going or where I was coming from. That name defeated my tongue, but it was my destination for the day when I left from my tiny room in Sidikalang. 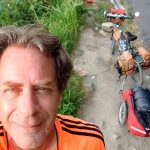 FROM THE TRUCK STOP TO SIDIKALANG
As I anticipated, the first part of this day involved pushing my bike up a few hundred more meters of altitude. The truck stop was about two thirds of the way up the volcano, and I had to go up the final third until I reached where this smaller road met up with a larger one. I had no idea …